Camtasia 2 Review: How does it stack up?

Sometimes we need something that just works. Not everyone in development can be a master videographer, yet there has to be a way to boost our marketing and training needs. That’s where videos come into play. At Axosoft, we have been using Camtasia 2 recently and would like to share our experience with a review. 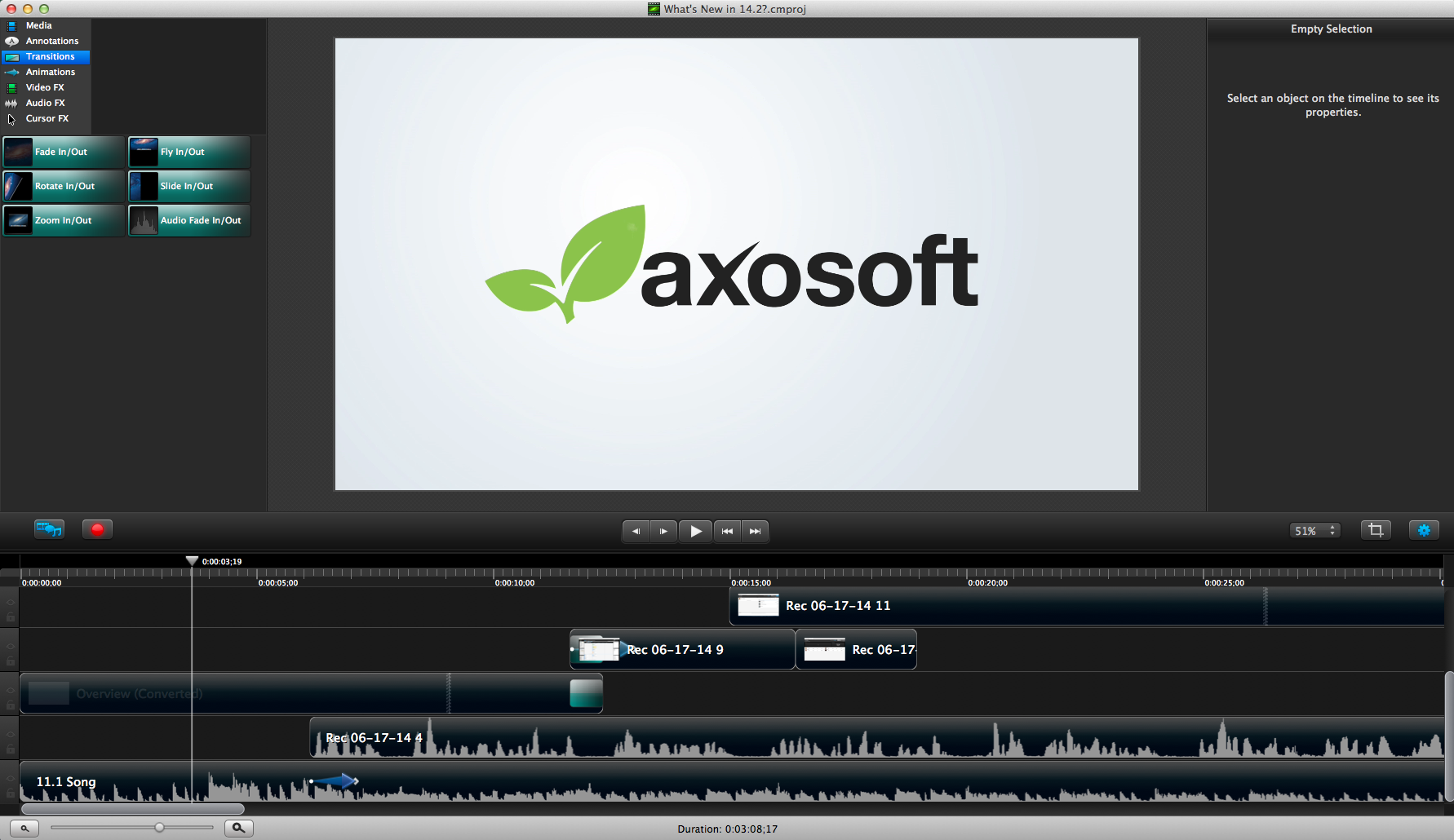 This is our tool of choice for the simpler videos.

Camtasia 2 (as described on Techsmith) is a screen recording and video editing tool. It differs from other solutions like iMovie or Adobe’s Premiere in that it focuses on providing easy screen capture without needing to juggle several media files or get a PhD in videography. While we have enjoyed using it, there are some snags we’ll talk about towards the end.

First off, I have to say that screen capture is pretty easy with Camtasia 2. Before, I used Snapz Pro X to first capture my screen which would then be exported as a .mov file to then be imported into iMovie and then edited. It was a process. With Camtasia however, your recording is immediately ready for editing once you finish capturing. You can set the screen size, use your own mic, and restart recordings. 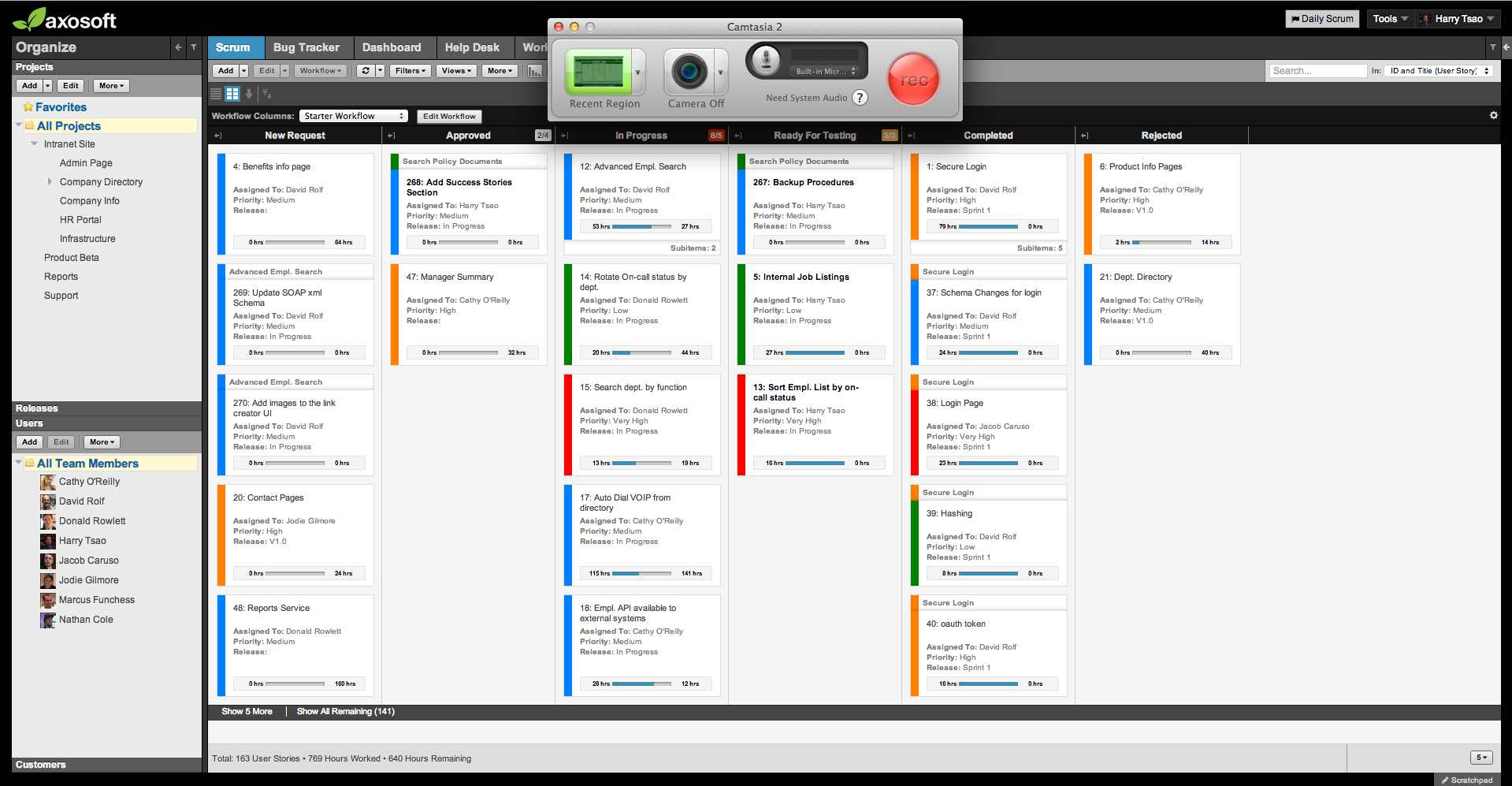 You have the option to customize the area you record on screen. I usually go with 1920×1080.

The tool keeps all your recordings and other media in one place. You drag and drop the media onto the tracks to begin editing from there. Camtasia 2’s learning curve is not that steep, which makes it approachable for folks (like myself) making video series for the first time. Once I learned how to cut, zoom, and transition in the tool, I was able to produce a great rough cut overlaid with music.

Here’s the tracks you edit. I like having the music as my foundation when editing.

We got really excited about the effects in Camtasia 2. The annotations, transitions, and animations are pretty easy to use (just click and drag) and they punch up the quality of the content a few notches. Initially, we were sold on the ability to track your mouse cursor. Surprisingly however, I found myself using annotations more than the mouse tracking. You’re given many options in styles and customization, and you can even add transitions to the annotations. 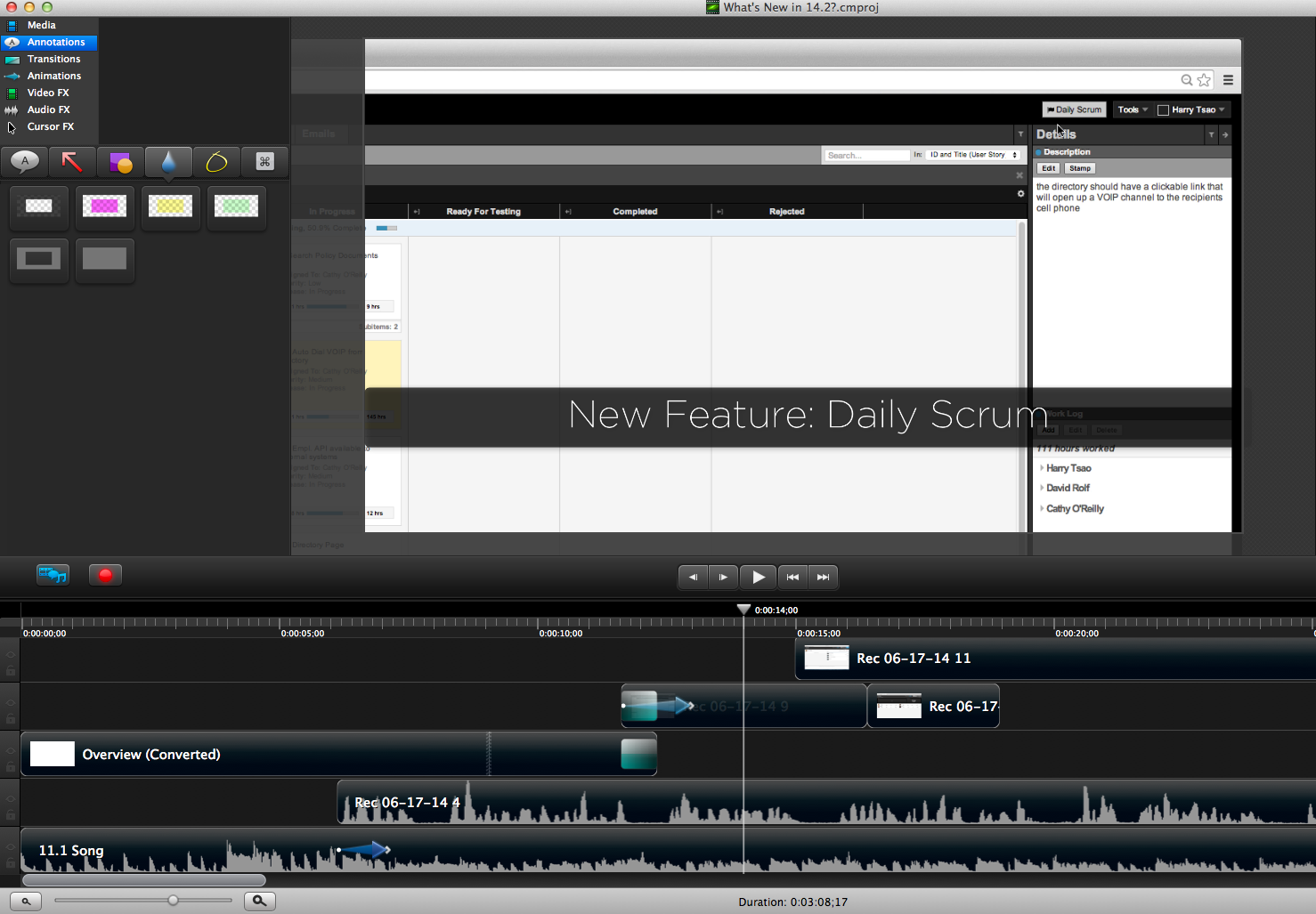 Annotations rock! So many awesome options.

Snags: Nothing is perfect, which is great news for developers (yay, job security). Something I did appreciate about iMovie is its ability to freeze frames. It’s easy. You just scrub over to the frame you desire, click freeze frame, and adjust the duration from there. With Camtasia 2, the freeze frame equivalent is “Extend Frame to Playhead” which works…sort of. It does get the job done but first you have to cut, select, extend, and then adjust again (and it took some time to discover). Perhaps I’m being nit-picky, though the feature could be more elegant. 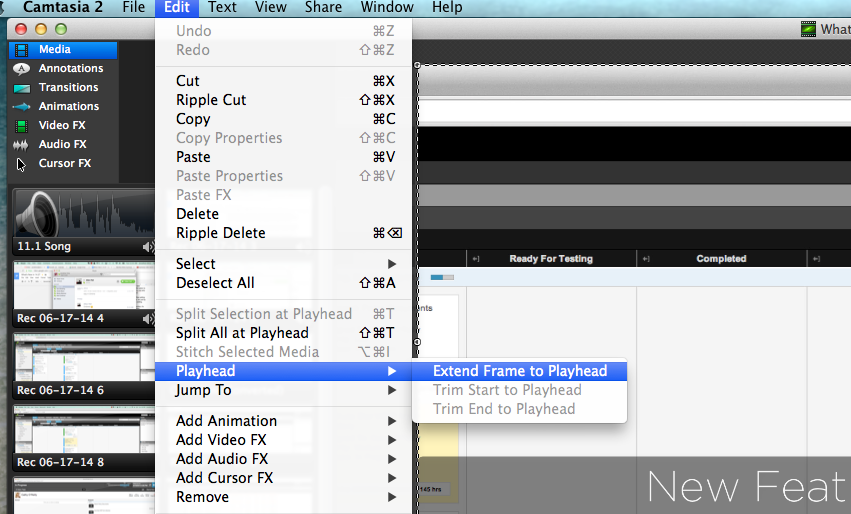 Also, if you ever move the file locations, Camtasia 2 will lose files until you tell it where you put them. An understandable side-effect that is mostly mitigated if you keep your files in one place initially. If you’re about to get going with Camtasia 2, just be mindful of this in your workflow.

If screen capture is a huge part of your video editing, then Camtasia 2 will do the trick beautifully. If you’re a hardcore videographer, then you’re probably looking for something more robust but otherwise this is a great find.